What Color Should the Lights Be On Garage Door Sensors – What color are the garage door sensors supposed to be? If you have issues closing but not opening your garage door, chances are you have a problem with your safety sensors or “Photo eyes”. These sensors are designed to ensure that nothing is in the way of the door at the bottom of the opening. They only have an effect on the closing of the door, so if your door opens but does not close, it is a good sign that it might be the garage door sensors. Because of their location, they are often bumped or moved or covered with dust, dirt, or leaves in the garage. Photo eyes will usually have an emitter eye and a receiver eye, meaning one sends out (transmits) the beam and the other senses or (receives) the beam. If the beam is not received, the door motor will stop closing the door. Safety beams will usually come in sets and each manufacturer uses different color LEDs to denote their operation. However, most garage doors will have similar colors. So, what color should the lights be on garage door sensors when everything is OK? See below.

If you are in the Austin area, the easiest way to figure out the problems is to give us a call at Cedar Park Overhead Doors 512-335-7441. If you like to do things on your own then keep reading. Usually photo eye problems are easy fixes and you should be able to get back up and running pretty quick.

There are about 5 garage door motor manufacturers popular in the Austin area today. The majority of the new garage door openers and the colors are listed below. 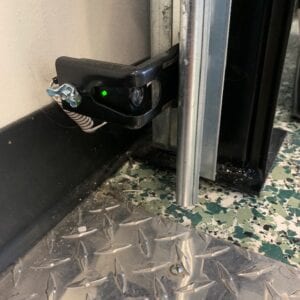 This is a very common high quality operator and has three different versions of photo eyes styles ranging back about thirty years. They always work the same way with the same LEDs and colors. The quickest way to know if it is a photo eye problem is to look at the light bulb on the motor. If you push the wall console for the door to come down and it does not move but the light bulb blinks eight times, the photo eyes are broken or not aligned. The new Photo eyes are compatible with the old photo eyes. One photo eye will have an Amber LED Yellow and the other will have a green LED. The transmitting photo eye has the yellow LED and it should always be lit. When it is lit, it is sending the beam across the garage door opening. If it is off, none of the photo eyes will be lit because there is no signal being sent. In this case, you have a bad transmitting photo eye the problem may be a broken wire from the motor head providing power to the photo eyes or the connection at the motor is loose. It might also be a bad logic board in the operator due to board failure, power surge, or lightning strike. Check the wires to the photo eye first. Second, replace the photo eye. Lastly the logic board. The receiving Chamberlain Photo Eye photo eye LED should be Green and should be brightly lit. Assuming the transmitting LED is lit and nothing is blocking the path across the opening the receiving eye should be solid green. If it is not, then wipe the lens clean, move the lens so that it points towards the receiving eye, Check the wires to the motor, or check the logic board. Most often, the problem will be the eye needs to be adjusted. Loosen the thumbscrew and move the eye until the beam becomes brightly lit. Watch the beam closely and as you adjust it when you go the 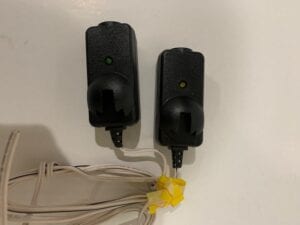 Genie, Overhead
This brand of operator is also common and has been around for many years. This brand of photo eyes also have a couple of revisions with the older style being 3″ squares 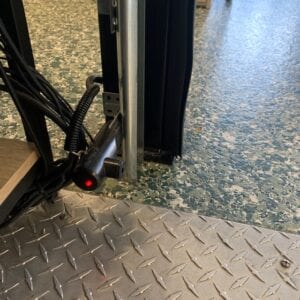 and the newest version being a tube or cylinder shape. Regardless, the photo eyes operate in a similar fashion, The transmitting eye will always be lit Solid RED. This means good and it is sending the signal. If is is not red, check the wiring to the motor head, check the photo eye  for corrosion or a bad connection, finally check the operator logic board.  The receiving eye will be solid RED if it is receiving the transmit signal and everything is OK. If it is off, or blinking then there is a problem. If it is off, then check the wiring. If it is blinking the signal is blocked or the transmitting eye is bad.  Verify the sending eye, verify the wiring to the motor. Ensure the lens is clean. The older version of this photo eye had a tendency to lose the lens.
For Gennie
Transmitter LED should be lit Solid RED.
Receiver LED should be lit Solid RED. 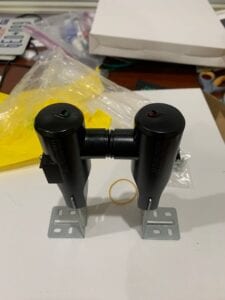 Marantec.
This manufacturer is not as common in the Austin area but we still see calls for them. It is a very quiet operator. There are two types of photo eye designs. Their first design was shallow and clear 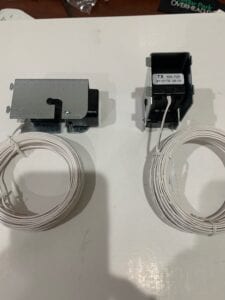 and was prone to interference from sunlight. The second design was rectangular and deeper and solved the earlier issue. Photo eye sensors maintain an invisible, unbroken beam between each other. When the photo eye sensors are connected to the operator and the power is on, the green light on the transmitter sensor flashes. When the sensors are aligned, the green light on the transmitter sensor and the red light on the receiver sensor will light up.
Transmitter LED = Green solid
Receiever LED = Red Solid.

Wayne Dalton:
There are not many of these operators in the Austin area and most have been replaced by this time.

Guardian
This operator is not very common in the Austin area but has been seen a little more often due to it being embraced by a questionable company more interested in product cost rather than product reliability and capability in our opinion.
From their manual;
1. When the Photo Eye System is properly connected and the power is connected, one of the Photo Eyes will emit a
steady green light. This Photo Eye is the Emitter that generates the Invisible Light Beam.
2. When properly aligned, the Sensor should emit a steady red light when it senses the invisible light beam from the Emitter.
3. If the indication is unsteady, flashes or is dim, check for any obstructions and adjust the position until the Sensor gives a STEADY RED LIGHT.
Guardian Summary:
Transmitter LED = Green solid
Receiver LED = Red Solid. 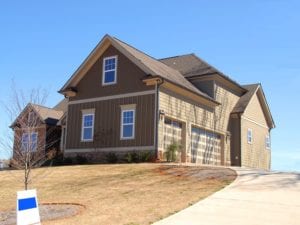 how garage door sensors work and the color the lights should be. We’ll also highlight the significance of hiring a professional to fix the issue.

How Do They Work

Garage door sensors work using an infrared beam of light. The light is emitted from one side of the garage door to a receiving unit on the other side of the door. If the path between the sensors is unbroken, the door will open and close normally. However, if the sensor detects an obstruction that prevents the door from closing, say your dog is running under the door as it’s closing, that breaks the path between the sensors and a signal is sent to the opener. This activates the automatic reversing mechanism and reverses the door to prevent injury.

These sensors are little black boxes found on either side of the bottom of the garage door. Each sensor will usually have a light. One will have a green light, used to show that the units are powered up, and the other will have a red light to show that there’s no obstruction between the sensors and that they’re ‘seeing’ each other.

If the sensors are thrown out of alignment, then the red light will blink. To fix this, all you need to do is simply re-align them by moving one of them until the red light stays lit. Sensors are usually attached to the garage wall by metal supports, but they’re easy to reposition or bend if necessary. Another possible problem could be the sun. If the sun shines on the sensors, it may hit it in such a way as to block the light. A simple fix would be to block out the sun by fixing a piece of cardboard in 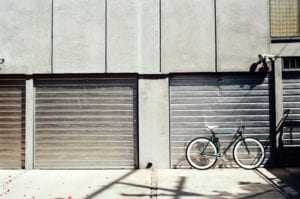 front of the sensor.

If the light is still blinking, there may be a problem with the wires connected to the sensors. Be sure to check that the wires have been securely attached. It’s also important to check that one of the wires hasn’t been cut. It’s important to note that you can find the error code on the motor unit by counting the number of times the red-light blinks. Simply check the user’s manual to troubleshoot the problem and see if you can fix it on your own.

With those tips, you can now answer the question: What color should the lights be on garage door sensors? Bear in mind, however, that different manufacturers will use different lights. Always consult the user manual and seek professional help if you’re unable to fix the problem on your own. Only a seasoned professional has the skills and expertise to do the job right and ensure your garage door works safely. If you would like to know more about your garage door sensors, you can contact our professionals here at Cedar Park Overhead Doors to answer any of your questions.